Do you ever get home, sink into the sofa and just think, “wow, what a crazy day!” Earlier this week, we had one of those days.  When I arrived to the hospital for rounds in the morning, my partner, Dr. Ben, and our rural registrar, Dr. Cindy, were already busy in the Emergency Room. A vehicle had struck three pedestrians early in the morning. One was dead on arrival, the second one had a femur fracture, and the third one (we’ll call him “T”) had bilateral femur fractures, a pelvic fracture, and pulmonary contusions. While Ben and Cindy continued to evaluate and stabilize the trauma patients, I started rounds on the ward.

Forty-five minutes later, we reassessed the situation. We had 6 scheduled surgeries, a consult to see on medical ward, and three tibial traction pins to place in the ER. I started toward the Operating Theatre while Ben and Cindy saw the consult and managed the trauma patients. When unexpected circumstances like this occur, I switch into determined let’s-get-it-done mode. We flew through the first two surgeries: a pediatric inguinal hernia repair and a skin graft for an upper extremity wound. As Dr. Cindy and I started a laparotomy for excision of a huge (greater than 40cm) ovarian cyst, Dr. Ben was getting the trauma patients situated in the ward in traction. Then, he started a pelvic laparotomy for a large, chronic tubo-ovarian abscess that was adhered to everything in the pelvis. Once Dr. Cindy and I finished our case, we decided there was enough time to do a quick tibial drilling for osteomyelitis before breaking for lunch. The teenager was on the table and we were at the scrub sink when Dr. Nathan, one of our medical doctors, burst into the room. An older man had been chopped in the face by his son, and they were having trouble controlling an arterial bleed near his severed ear. I ran with him to the ER to help control the offending vessel. The man’s ear had been completely transected transversely down to the mastoid bone underneath. The cut also extended to his cheek with exposed parotid gland. Once we got a clamp on the bleeder, I asked them to prepare him for surgical washout and repair while I ran back to our already anesthetized patient in room one. By the time we finished the washout and tedious repair of this man’s ear, I was more than ready for a lunch break; it was 2pm.

Just as I was settling down for the first bite, Dr. Ben called. Trauma patient “T” had been dropping his blood pressure over the course of the morning and we had been taking turns between cases evaluating and resuscitating him. On admission his abdominal ultrasound showed just trace free fluid, but now on repeat scan he had a large amount of fluid in his abdomen concerning for an uncontrolled bleed. Dr. Ben was taking him to the theatre for emergency exploration. As soon as I finished my lunch, I popped my head into the theatre, they were getting the patient positioned and anesthetized. Then Dr. Ben came in with a look of disbelief on his face. My last patient, the old papa with the ear laceration, had swallowed his oral airway! He was coughing and choking in the recovery room. The offending object could not been seen with a laryngoscope, so I took him to room two for an exam under anesthesia. 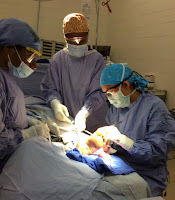 Once his airway was secured, we looked in his esophagus with a rigid scope, but the object wasn’t there. It must have passed into his stomach we surmised incredulously. An EGD showed the stomach was completely empty. Could this large curved plastic mouthpiece have passed through his pylorus?! Upon reporting our findings to Ben, a student in his room spoke up: papa had spit out the oral airway and it had been thrown away. He had been choking on his own spit this whole time! Meanwhile, Ben had removed the ruptured spleen, repaired the bladder injury and packed the pelvic hematoma in the trauma patient. Our last case was a washout and debridement of an infected wound. This young lady had her foot nearly amputated in a chop-chop incident 2 weeks ago. We attempted repair but the wound got infected. Thankfully, the infection appears to be superficial and there is still blood flow to the distal foot, so we hope it will be spared. 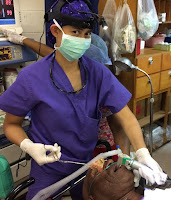 Finally, exhausted, we headed home. But before we could get there, Dr. Nathan called from the ER. A man had eaten a large piece of meat and a bone was now stuck in his throat. We fished it out with some forceps and were surprised to find not a fish bone or a little chicken bone, but a 3x3in sheep bone! No wonder he was having trouble talking.


As I returned home again, exhausted, but strangely energized by the interesting case, I thanked God for providing the right people and resources to care for all our patients today. It was the busiest day since I've been at Kudjip: twelve procedures in one crazy day.
Posted by Sheryl MD at 12:26 AM 1 comment:

See one. Do one. Teach one.

There is an old surgeons’ motto that goes, “See one. Do one. Teach one.” I’m finding it very applicable here in Papua New Guinea. Although, sometimes the first time I see a procedure is the first time I’m doing it! For example, the first tubal ligation I witnessed was when Dr. Pringle, a visiting OB/GYN, walked me through the procedure during my first month at Kudjip. The following month, after Dr. Pringle had returned to the States, I performed many tubals, while showing our trainee, Dr. Cindy. 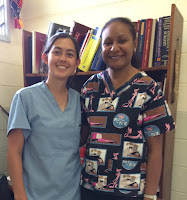 Cindy is a Papua New Guinean doctor in the Rural Registrar program. She is the only doctor at her 40-bed rural hospital in the Central Province of PNG. In the program, she gains training in the many specialties that one must know to be a solo practioner: OB/GYN, Pediatrics, Anesthesia, General Medicine, Public Health, and, of course, Surgery. In addition, she gets training in the administrative side of running a rural hospital with courses in budgeting, finance, administration, community relations, communications technology, and maintenance (i.e., how to set up solar power and maintain radio services).  It has truly been a blessing to be a part of her training and to pass on the skills that I have learned. The next time we had a tubal, she did it while I assisted. See one. Do one. Teach one. I’m always amazed how much more I learn when teaching someone else a skill. 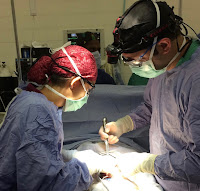 The motto doesn’t always hold completly true. For example, the first prostatectomy I saw was one I was doing under the tutelage of Dr. Ben, one of my partners and mentors. Ben grew up here at Kudjip, the son of our senior surgeon, Dr. Jim. After finishing his surgical training in the U.S., Ben returned to PNG to work with his father. He is currently finishing his 2-year term with Samaritan’s Purse Post Residency Program, the same program that brought me to PNG.  Only a few years my senior, I’m amazed at all that Ben has learned in his time here. In addition to learning the orthopedic, gynecologic, and urologic cases we didn’t learn in residency, he has also brought many innovations to the Highlands of PNG, such as laparoscopic surgery, which we take for granted in the States.  Hopefully in two years time, I will feel as comfortable and confident as he is treating the myriad surgical pathologies we encounter here. Even though I’ve seen or done some of these more complex procedures, I’m definitely not ready to fly solo or teach them yet. 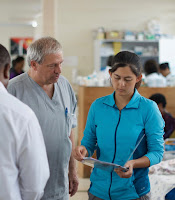 Some times the motto is more like “seen a lot, done a lot, and trying to pass it on”.  Dr. Jim has been practicing surgery at Kudjip Nazarene Hospital for 32 years. Most of that time he was the only surgeon here; on-call 24/7. From all those years of experience, he has a wealth of knowledge. Beyond surgical technique, he is also teaching me the intangibles of practicing surgery in a rural, resource-limited setting: When to say no to one patient who has the ability to get services elsewhere in order to help the five patients who have nowhere else to go.  When to say no to an operation because the patient won’t survive post-operatively without a ventilator and ICU level care. When to say no in order to avoid burnout and preserve one’s ability to continue serving here long-term. Sometimes the circumstances seem overwhelming, but Dr. Jim has shown me the most important thing I can learn here: Always say yes when there is an opportunity to share the hope found in Jesus. Countless times, I have witnessed him praying with his patients in the clinic, on the wards, and before surgery in the operating theatre. That is one thing I hope to see and do and teach for many years to come. 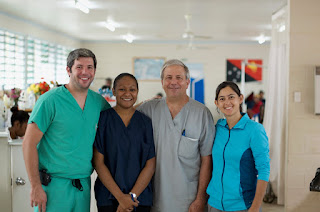 An excerpt from my June update letter: 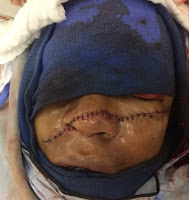 "The most difficult thing this month was witnessing so many cases of domestic violence. One weekend, we admitted three women who were “chopped” by their husbands. One woman related how her husband took her down to the river to kill her. She escaped with lacerations to the scalp, multiple open fractures of the arm and two amputated fingers. Another woman was chopped in the face - the bush knife (machete) went all the way down to the bone. In a society saturated with violence, my heart aches for these women who are subjected to such physically, emotionally and psychologically scarring abuse. Even after the physical wounds have healed, the social issues remain. Many women don’t press charges  because they don’t want the family bread-winner to go to jail. Polygamy is common here and many women are neglected or abandoned when the husband marries a new wife. Due to the local customs, many of the abandoned women have nowhere to go, they are ostracized by their husband’s clan and can’t return to their own clan once the bride price has been paid. In the midst of so much pain and brokenness, I turn to an all-powerful, all-loving God who “heals the brokenhearted and binds up their wounds” (Psalm 147:3). My hope is that these women will find freedom and complete healing in the arms of the God who loves them more than any person ever could. 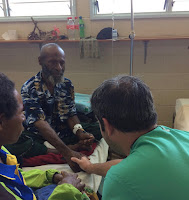 On the positive side, it is exciting to see patients place their hope in Christ. This man came to the hospital with a 1-month history of dysphagia (difficulty swallowing) and weight loss. Work-up revealed un-resectable esophageal cancer. Dr. Ben sat down with him and his family to explain the diagnosis and his poor prognosis. Without chemo or radiation therapy available, we knew his days were numbered. When Ben asked if he was ready to meet God, the man hung his head in shame. He had once followed Christ, but backslid and turned away. Now, he decided, he wanted to change. His prayer of repentance brought tears to my eyes. This is why Kudjip Nazarene Hospital exists: to bring hope to the hopeless in the name of Jesus Christ.

Thank you for your continued prayers for my co-workers and I as we “shine among them like stars in the sky as [we] hold firmly to the word of life.” (Phil 2:15-16)"