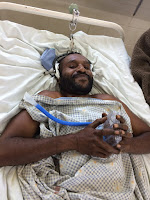 For the past two weeks, we have been running a neurosurgery/spine unit on surgical ward. Often patients with brain or spine injuries have a poor prognosis in our resource-limited setting, but a few of our current patients are proving us wrong. It started when a young man, David, broke his neck in a tree-felling accident two weeks ago. When he first arrived to the hospital 10 hours after his accident, he was quadriplegic—unable to move all four extremities. We put him in cervical traction—Frankenstein-esque bolts in his head with weights hanging off the bed—to stretch out his spine. Praise God, it worked! Within the first 24 hours he gained back sensation to his arms and legs. In the past year, I have seen one other cervical traction patient who succumbed to pneumonia in the first 72 hours, so we were very vigilant when David started showing signs of respiratory compromise. Lying in bed all day with a paralyzed diaphragm, he was unable to cough or clear his lungs— something you and I take for granted. By God’s grace, he pulled through. The next day, we were overjoyed when he wiggled his toes. Again something we take for granted, but for him it was a sign that the spinal cord damage was not permanent and he has a good chance of regaining motor function. This week, he was able to lift his hands enough to hold his own breathing exercise bottle. It is absolutely amazing to see how God is restoring the lame before our eyes. 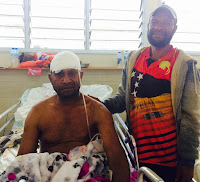 In the past week we have also treated a man with a depressed skull fracture from a chop to the head. Dr. Ben removed a large bone fragment from his brain and replaced the missing bone with a metal plate. Anton still has paralysis of the right arm and weakness of the right leg, but he is slowly regaining the ability to walk again.

A few days later, a 5 year-old girl was brought in with an abscess near her spine and hemiplegia (paralysis of one side of the body). For the first several days, I was discouraged when she showed little improvement after surgical drainage and medications; but recently, Henrisa has started moving her right arm and leg again! God is truly answering prayers.
In all these cases, I have seen God’s amazing provision—miraculously providing what we need when we need it. Two days before Anton came, Ben discovered that skull plate (our only one) in another orthopedic set and made a comment to the nurses, so they were ready when he needed it. While searching for a cervical collar in the Emergency Room the night David arrived, I noticed a pediatric collar in the cupboard, and would you believe it was the PERFECT size for our 5 year-old patient the next week. The only pediatric collar we have... perfect fit. I don’t think it’s a coincidence.
Please join me in lifting these patients up in prayer as they continue on the long road to full recovery. I am confident that God will provide all that they need.
Posted by Sheryl MD at 12:21 AM No comments: 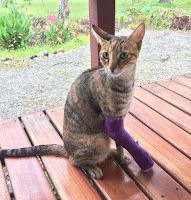 Three weeks ago, Kira, my cat, broke her front leg. I don’t know how it happened. When I came home for lunch one day, she was hobbling around and crying. Although I considered letting it heal on its own, it was quite angulated at the fracture site. So, with the help of my friends at the hospital, she got a shiny new fiberglass cast.  I was satisfied that her leg was straight and protected from further injury or the pain of being jarred accidently. She was not thrilled to have this heavy, awkward boot attached to her leg and weighing her down. She stumped around like a pirate on a peg leg but the weight prevented her from jumping up on her favorite chair. Within 24 hours, she had slipped her injured paw out of its purple prison and was happily washing it in her favorite chair again. But the effort of extracting her paw had angulated the fracture again and every time she was accidently bumped, she would cry out in pain. 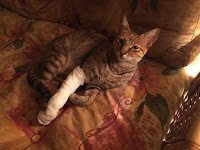 Again, I considered letting her heal on her own, but it pained me to see her in this sad state, so I applied a smaller, lighter, tighter-fitting plaster cast. She had more mobility with the new cast, but she still didn’t like dragging along extra weight and was intent on removing the offending object. The next day, she disappeared for close to 24 hours, vowing not to return until she had removed the plaster cling-on. Afraid that she would be easy prey for the stray dogs that frequent our neighborhood, I searched desperately for her and finally gave up fearing the worst. But after a night out in the damp, her cast was soft enough for her to extract her paw and finally she returned home. Her leg was more crooked than ever, but finally I gave up and left her to heal on her own. Now, three weeks later, there is strong callus at the healing fracture site and she is running, jumping, and catching critters again with her crooked leg. Whenever I tell this story to my PNG friends, they laugh, first at my attempts to place a cast on my cat, but secondly at her “bikhet” (stubborn) ways. Then it struck me, how often have I stubbornly refused to be helped? I can think of several times in my own life when I was broken (emotionally or spiritually) and God tried to provide a support, but I blindly rejected it thinking it was a burden at the time. I preferred to suffer through on my own not realizing that someone who loved me and knew the situation far better than me was trying to ease my pain and help me heal. In my struggle against his loving arms, I likely caused myself more pain and distress than if I had just accepted the help. Who knows how many ugly subconscious scars I carry now because of my stubborn pride.  Lord, help me to trust you and accept your correction and guidance in the midst of my brokenness. Amen. 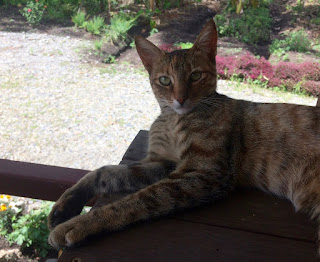