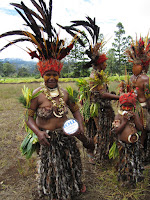 The Papua New Guinean motto is “Unity in Diversity”. Nowhere is that more apparent than at a PNG cultural show. Once a year, dozens of tribes from several surrounding provinces gather in Mt. Hagen, the largest city in the Highlands region to showcase their unique, traditional dress, music, and dances. Cultural shows were originally organized as a way for warring tribes to gather peaceably in friendly competition. Now it is a way to celebrate and showcase the diverse cultures of Papua New Guinea. 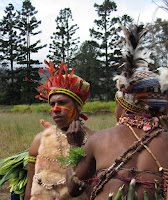 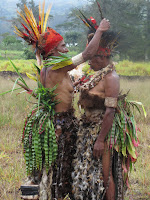 It was fun to walk through the grounds during the pre-show preparations as each tribe applied their distinctive face paints, feather headdresses and ropes of shell necklaces. I enjoyed learning where each group was from and what unique ‘bilas’ (decorations) they used.

Many tribes wear the long, colorful plumes of the famed ‘kumul’ (bird of paradise), which is the national bird. Others feature feathers from roosters, peacocks, ‘muruk’ (cassowary: a large flightless bird), or parrots. Some headdresses are hats woven from moss, bark or colorful yarn with beaded bands or leaf decorations. 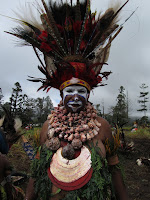 Breastplates can be made of bamboo, large shells, boar tusks, or animal furs. Many people use the fur of the ‘kapul’ (cuscus) in their hats, breastplates or skirts. Skirts can also be made of grass, strings of chicken feathers, woven fabric, or just a loincloth with traditional tanket leaves covering the backside. 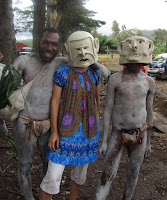 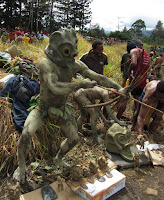 Some of the more unique characters are the mud men and the skeleton men. The mud men come from Goroka, a town in the Eastern Highlands Province. It is said that they were once chased by an enemy tribe and forced to hide in a muddy river bed. When they emerged, covered in grey mud, their enemies believed them to be spirits and ran away in fear. Now the mud men make gruesome clay masks to complete their other-worldly guises. One mud man was quite friendly and even let me try on his mask! 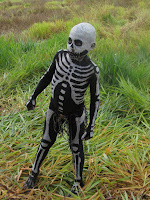 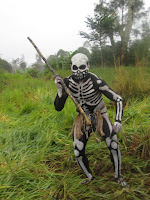 The skeleton men are another unique group who paint their bodies with charcoal and ash to give the appearance of skeletons in order to frighten their foes. One man showcased their traditional battle cries as he danced with a pretend spear.  He was quite the performer and seemed to love all the attention. 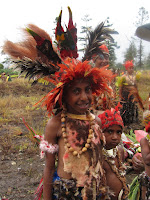 It was also fun to see the children getting involved, learning the traditions of their ancestors and adding immensely to the cuteness factor. 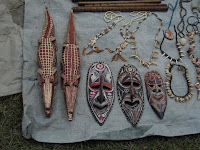 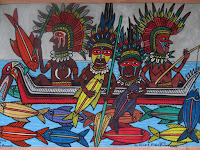 Many local artisans attend the show to display their traditional paintings, carvings, shell jewelry, and artifacts. It is truly amazing how God created people with such widely diverse customs - each beautiful and creative in their own way.

Before the end of the day, my face was painted too (with a bird of paradise in PNG flag colors) , and I joined my new friends as we smiled and laughed. It seems that smiles can cross any cultural barrier and truly unite all of us, no matter our culture. 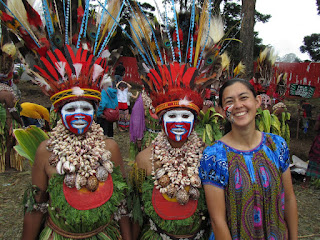 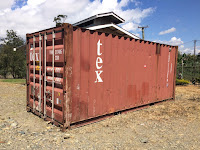 Some of our hospital supplies come from the government; but with budget cuts and supply shortages, we rely heavily on donated items. Lately, we have been short on sterile gloves, sutures, dressing gauze, IV fluids, essential medications… pretty much everything. So you can image our joy when a 20ft shipping container arrived this week packed full of donated medications, surgical supplies, dressing supplies, and much more. It was like Christmas in August!

The surgical team spent the whole afternoon after clinic opening boxes and squealing in delight when we discovered sterile gloves (we have been out of Dr. Ben’s and my sizes for almost a month now), elastic ACE bandages (who knew a simple bandage could bring such delight), real dressing gauze, foley catheters, hemostatic agents, sterile surgical kits, and so much more. They may seem like simple things, but it’s very hard to do surgery and run a hospital without basic supplies.

These containers come approximately every six months, traveling on a cargo ship across the ocean to port in Lae. After passing customs (which can take weeks to months), it is loaded on a truck and makes the 400km journey from the coast, over the mountains, to the highlands (same route through the mountains I traveled when I went to Madang – see earlier post). I can’t imagine how those large trucks make it up some of those grades on the pothole-filled roads. The whole journey can take between 3 to 9 months.

This container was sent by Project S.A.V.E. a non-profit group that “collects, then re-distributes, quality recycled medical and dental equipment and supplies both locally and around the world, free of charge, in an effort to help people receive needed care who otherwise might not.” Other organizations that regularly supply containers include Nazarene Hospital Foundation and Samaritan’s Purse. We are extremely grateful for these dedicated partners and for everyone who donated supplies or funds to help with shipping costs. These supplies will enable us to continue performing surgeries, saving lives, and sharing God's love to the people here in the highlands of Papua New Guinea.

**If you are interested in ways to donate, please see links to our partner’s website above or check out my How to Support page.