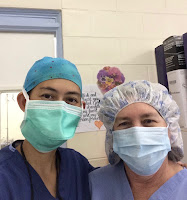 Three weeks ago, I had the privilege of introducing my mom to  Kudjip Nazarene Hospital. Mom came for a 3 week visit and the first week was spent in the Highlands. She brought much needed supplies, attended devotions, followed me on rounds, helped in the pharmacy, and watched me interact with patients in the clinic and during surgery. She also met some of the patients who have been mentioned on my blog and in my newsletters.  Throughout the week, She followed several surgical patients during the ups and downs of recovery. Most did well; a few did not –a  true look at life in a missions hospital.

Her favorite patient experience at Kudjip was watching me deliver twins by c-section. Mom donned scrubs, mask, and bouffant hat and was carefully positioned in a corner of the room to catch all the action (with the patient’s permission, of course). She watched as we delivered a baby girl, then a baby boy, both healthy. What made this experience even more special was that she met the twins again a week later. On the way to my friend Emelyn’s house for a family meal, Emelyn told us about her niece who was recovering from surgery. It turns out her niece was my patient! Mom was trilled to hold the twins and get the opportunity to share a traditional PNG meal with these special friends. 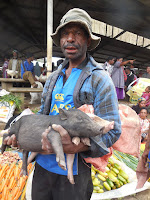 In addition to working in the hospital and meeting my friends and the other missionaries on station, we also explored the surrounding Highlands. The Deuels and I took mom to Mt. Hagen to experience the open-air market. 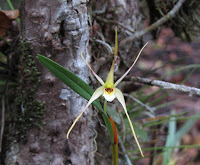 Then, we stayed the night at Rondon Ridge, perched on a mountain overlooking the valley. There, we hiked to a small waterfall, then found over 20 varieties of orchids along the winding trails of the orchid garden. Some of the flowers were only a few millimeters in size!

The next day, we drove an hour further west to Kumul Lodge, a popular birding site. There, we saw a dozen different species of birds, including two types of Bird of Paradise: the ribbon-tail and the sicklebill. It was quite a week of adventuring in the Highlands, but that was only the start. In the next blog, we travel to coastal PNG, an island, and then on to Australia…. Stay tuned.