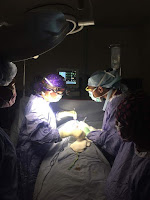 The specimen was out and we were just starting to close the wound when the whole room went completely dark. Unfazed, we patiently waited for the five clicks and gentle hum that indicate the back-up generator is turning on. The clicks came, but the lights did not. The nursing students fumbled around in the dark for a headlamp (which I foolishly had not put on at the beginning of the case), but the batteries were dead. We finished the case by the light of the Anesthesia Officer’s cell phone. Eventually, the generator came on and I made sure to wear my headlight (with fresh battery) for the next case. Predictably, the power went out again in the middle of the case. This time we were prepared. We had moved a portable battery-operated light into the room, but the light would drift if not held, so a student balanced the light on her head as we proceeded with the case. Just another day in PNG!

Operating without electricity has made me very grateful for the visiting I-TEC (International Technical Electric & Construction) team. Two dozen electricians, linemen, generator technicians, and support staff are currently upgrading our electrical system across the mission station. We are blessed to have fairly consistent power generated by a hydroelectric dam, but recent growth and expansion of the station infrastructure have made upgrades necessary. Even with the frequent power outages as they work on the lines, the generator has kept the power to the hospital on, until the generator overheated that day during surgery. 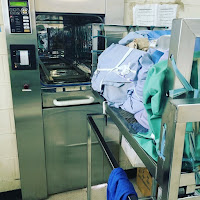 Unpredictable – that is the word I would use to describe working in PNG.  Power outages are only the most recent in a steady stream of difficulties in the operating theatre. A few weeks ago, our main autoclave broke down (photo credit: Dr. Ben). Without the ability to sterilize equipment, instruments, gowns, and drapes we were forced to cancel elective surgeries and go to emergency cases only. Thankfully, parts were found for the older, smaller autoclave from the old hospital, so we are managing until new parts arrive. 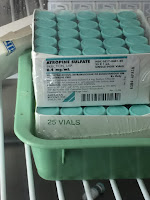 Shortly after the autoclave issue, we discovered our supplies of atropine were critically low. Atropine is an essential drug to control secretions and heart rate in patients undergoing general anesthesia. There seems to be a widespread shortage as several of the hospitals in the Highlands are also on short supply. Again, we went to emergencies only or cases that did not require general anesthesia. Almost as soon as the announcement was made, two emergency c-sections came in: one a footling breach, the other a repeat c-section. Praise God that both cases were successful. Both mothers and babies are doing well.  What a relief when some of the I-Tec volunteers brought us a fresh supply of atropine from the States this week.

With all the unpredictability, sometimes it’s tempting to become discouraged, frustrated or cynical, but in all these circumstances I see God’s hand of provision as he provides just the right spare parts, the right medications, and the right volunteers at the right time. One of my friends who works with the chaplains recently told me about a patient who received Christ on the wards this week and of several other patients who are interested in receiving Bibles. I am privileged to work in a place where God's name is proclaimed and patients can come to know the ultimate healer. It is encouraging to know that God’s work is going forward, whether we have electricity or not. 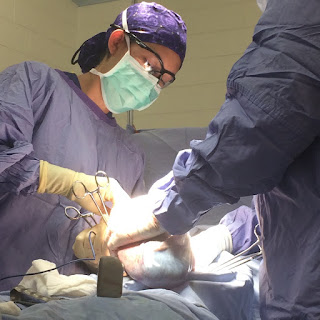