Back to the Unexpected

**I meant to write this post weeks ago, but time seems to have flown by. Now that Easter celebrations are over and things are settling back to normal, we’ll revisit the events of the past 6 weeks. Shortly after returning from vacation in Brisbane with my mom, PNG proved itself again to be the "Land of the Unexpected":


On Monday, February 26, at 3:45am, we were all jolted awake by a 7.5 magnitude earthquake that struck the Southern Highlands of PNG, about 120 miles southwest of Kudjip. Although there was minimal damage here at the Nazarene Hospital, there were extensive structure damage and massive landslides closer to the epicenter.

In the weeks following the quake, we have begun to see the extent of the aftermath as tens of thousands of people have been displaced from their homes, their land, and their livelihoods. Over a hundred fatalities have been confirmed. Victims were either crushed by collapsing buildings or buried in landslides.

The PNG government is partnering with Australian military and several NGOs on the ground to distribute aid, but efforts have been greatly hampered by the remoteness of the affected area and the great number of landslides that have blocked or destroyed roads.  Several rivers in the area were clogged with landslide debris making the water unsuitable for drinking and posing the greater threat of downstream flooding when the earthen dams finally give way. For more details regarding the ongoing challenges in relief efforts please see these reports from BBC and The Age.
After the initial earthquake, there have been more than 100 aftershocks which have slowed in frequency over the weeks. Just yesterday, April 7, we felt a large 6.3 magnitude aftershock which reportedly damaged one of the functioning airstrips in the area which will further hamper the recovery efforts. Please continue to pray for those affected.

The unexpected did not end there. In the week following the earthquake, a lightning strike took out the station's phone system, resulting in a month of very interesting on-call arrangements until the system could be fixed. During that time the autoclaves also broke which forced work at the hospital to limp along for several weeks until they could be suitably repaired (as detailed on Dr. Erin's blog) . During that same period, we also experienced an increased frequency of power outages which reminded me of a blog post I wrote last year at about this time. As they say: when it rains, it pours! 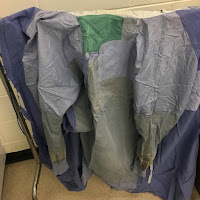 Thankfully, most things are back to normal around the hospital now and not all unexpected events are bad. Several weeks ago, we got a very pleasant surprise when a long-awaited shipping container from Nazarene Hospital Foundation finally arrived. In addition to the much-needed, donated supplies and medications, we also received a HUGE order of new re-usable surgical gowns and linens. The last time our linens were updated was 20 years ago and the patchwork gowns were starting to reflect their age. Thanks to the generosity of many who have donated to the hospital's Greatest Need Fund, we hope to have reliable surgical gowns and linens for another 20 years. I can't wait to see what new surprises are in store this week and this month!

*If you would like more information on how to aid our work at Kudjip Nazarene Hospital through sending medical supplies or financial contributions, please click the links above. Thank you to everyone who makes our continued work here possible.
Posted by Sheryl MD at 6:22 AM