A Matter of the Heart

I have never prayed so hard for a patient before, during, and after a procedure as I did last Tuesday. But then again, I haven’t met too many patients like Michael. The first things I noticed were his big, frightened eyes just above a nose that flared as he struggled for each breath. Laying on his side, in the only position that made breathing slightly easier, I could see his belly heaving in and out with each gasp for air. Behind his pained grimace, I noticed the gap where he was missing his two front baby teeth, indicating he might be 5 or 6 years old. Even before I met him, I knew about Michael. He was the boy who had arrested on the pediatric ward the previous week sending the nurses and doctors into a flurry of activity as they performed CPR and puffed breaths into his small body. He was the boy on whom my surgery partner had attempted, unsuccessfully, to place a needle to drain fluid from around his heart. He was the boy who was receiving every therapy the pediatricians could think of, because we didn’t know what was making him so sick.
Now the pediatrician was calling me because the fluid around Michael’s heart was increasing in size, compressing his heart until it was barely able to beat. Michael’s difficulty breathing was becoming worse and she worried he would not make it through the night. “Lord help me”, I silently, but earnestly prayed as I discussed the surgery with Michael’s parents. The prior needle aspiration didn’t work, so we would need to make a surgical opening (a “pericardial window”) into the sac around Michael’s heart in order to drain the fluid. Obviously this procedure is not without risks, especially in a patient as sick as Michael. Before taking Michael into the operating theatre, I prayed with his parents, releasing Michael into God’s hands. He had already died and been brought back to life once, and I knew there was a strong chance their son might not survive our attempts to save him a second time. Even though I have successfully performed this procedure several times, there are always risks. 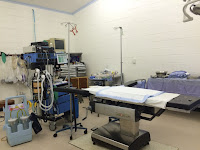 The last time our team performed this procedure on a man in a similar situation as Michael, the man’s heart went into a dysrhythmia, then stopped on the operating table. We were not able to resuscitate him. I know memories of that patient were strong in Auntie Margaret’s mind when she pulled me aside for another prayer as Michael went into the operating room.
Anesthesia and positioning can be tricky in this type of case because the patient can’t tolerate lying flat in the optimal position for control of the airway and for performing surgery. In addition, the patient’s body is in overdrive to keep the heart going despite all the strain. General anesthesia can take away that compensatory drive leading to cardiovascular collapse and death. Instead, we elected to perform the procedure under moderate sedation. Once the anesthesia team was ready—with all the emergency equipment and medications close at hand in case the worst should happen—we prayed again asking for God’s hand upon us all as Michael went to sleep. God’s peace calmed my spirit while we successfully performed the procedure: making a hole into the pericardial sac, suctioning out a large amount of thick clot and fibrous debris, irrigating with warm water (cold water can stop the heart!), and securing a drain tube in place. We all breathed a sigh of relief and praised God in yet another prayer before Michael left the operating theatre. 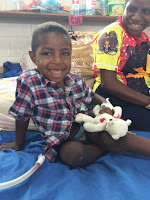 A few days later, Michael was a completely different boy from the one I had first met. He was sitting up in bed, breathing easily without oxygen, munching on some pineapple, and flashing a huge smile with two missing teeth. He also clutched the little toy bear I had given him moments before he went into the operating room. This bear was a special gift that one of my dear friends entrusted to me before I came to PNG with explicit instructions to give it to a child who particularly needed it. On the chest of the bear is an embroidered heart that lights up when the bear’s belly is squeezed. Michael happily squeezed the bear over and over, delighted every time the light came on in the bear’s heart.
“Michael,” I said, “do you see the heart on your bear? Your heart was very sick, but now God is making it better. Do you think your heart shines like this bear’s heart?” He nodded. “Does your heart shine the light of Jesus so that others can see it?” Somehow his huge grin became even bigger as he excitedly nodded again.
The day after we removed the tube from his chest, he started running up and down the ward like a kid who had never been sick. He exuded so much unbridled energy that a passerby would have never known that he had been inches away from death just a week prior. As I admired Michael’s joy and passion for life, I silently praised God for this miracle, knowing that his heart and mine will never be the same.